By Lijo Mathai 3 years ago
0 948 6 minutes read
Facebook Twitter Google+ LinkedIn Whatsapp StumbleUpon Tumblr Pinterest Reddit Share via Email Print
A good nine months ago, Tim Leverton, the then CTO announced that Tata Motors will have automatic options for the petrol and diesel Nexon SUV. While Tim did say it should be around January 2018, the launch was slightly delayed. But the Tata Nexon AMT is almost here now and we got a chance to drive it around the hills and what could be its domain in the future – the crowded streets.

For starters, the Tata Nexon still looks fresh. While you may say, the company may have moved few units from the showroom to the road and hence the ‘no familiarity’ scene, it isn’t. Tata Motors has managed to sell more than 28,000 units since launch. That’s impressive considering that the Nexon competes with the popular Ford EcoSport and Maruti Vitara Brezza in the sub-4m compact SUV segment. The Nexon SUV still looks concept-ish and that works in its favour if you really want to stand out in the sea of small SUVs. The only change on the outside that says that this is the AMT trim is the badging. Tata Motors refrains from using any sort of indication on its vehicles now that points towards the fuel being used in them. So the XZA trim of the Nexon could either be a diesel or petrol and one has to either open the hood or produce a great artistic project, the fuel flap or simply rev the engine to understand the engine in operation. 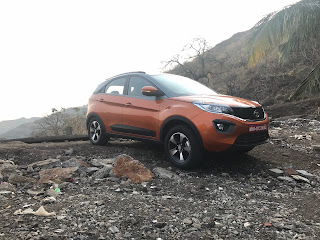 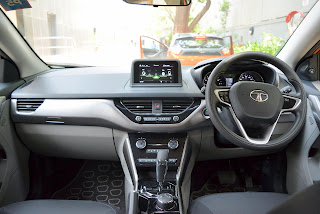 Changes from the manual Nexon include use of silverish trim for the fog lamp enclosures, roof as well as the tailgate. This new colour that you see here, called the Etna Orange will eventually be rolled out to the manual trims too.The inside sees the removal of the clutch pedal, gear indicator and the inclusion of the auto gear lever.

For the first time in the compact SUV segment have we seen a manufacturer offering an automatic option with both the petrol and diesel engines. Sure the Hyundai Creta does it too but its not really a competition for the Nexon here, given that the former is a tad bigger and is priced on the higher spectrum. I had a go at the diesel first. The previous day, Tata Motors did harp on how the AMT has been tuned to reduce jerkiness while lifting off the throttle for the shift to happen. I was keen to check this. After driving around for sometime, I can substantiate that while the jerkiness associated with AMTs is still there, it’s down to a great extent. I personally feel that Renault-Nissan has the best tuning for the AMTs and the one in the Nexon is nearly as good. That being said, the shift points especially for the diesel in automatic mode are a bit taller. In fact, 6th gear is engaged only after 120kmph. Tata Motors said that they have also introduced a kick-down feature in the Nexon AMT. For instance, while you overtake and step on the gas, the downshifts are far more rapid. This is one claim which I feel is a bit hyped. It still doesn’t downshift as urgently and you definitely need to plan before making any sort of overtaking maneuver. Of course, the drive modes – City, Eco and Sport do help change the throttle response as well as engine mapping. If you shift to manual mode, the system detects the same and changes the mapping to Sport. Here, the gears are held onto longer. 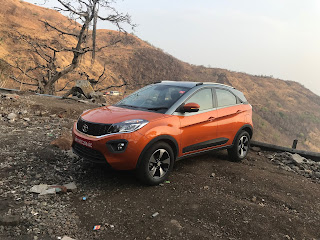 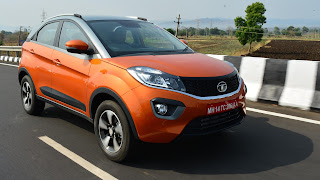 The petrol AMT in the meanwhile felt a wee bit more lively than the diesel. With the manual, its the opposite. However, proper tuning and sync of the AMT with the petrol engine means the turbo lag and slight sluggishness are gone. Few of my journalist friends found the throttle to be a bit more sensitive than the diesel. Tata Motors have added a creep function to the AMT-equipped Nexon and this means you don’t have to feather the throttle in traffic. The car moves smartly ahead and all you’ve to do is modulate the brakes. There is also the Hill Assist function that doesn’t allow the SUV to roll back on an incline. This could perhaps help enhance the life of the brakes in the longer run. Speaking of which, the brakes are still super sharp and require less pedal effort to bring the SUV to a safe halt from any speeds.

The ride quality of the Nexon was its highlight when I first drove it. The diesel car that I had for this test though seemed quite bouncy. Investigation revealed over-inflated tyres to be the culprit. The petrol Nexon behaved exactly the way it should with a supple ride quality that will definitely be appreciated by one and all. The handling isn’t bad either but a slimmer A-pillar may have helped while negotiating turns in traffic. The NVH levels are at par with the competition too. 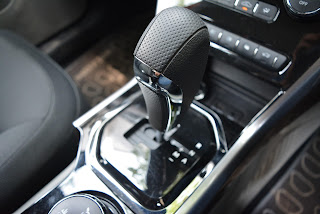 While its the same from the manual versions, mention must be made of the Harman system that now is lag free. the software is claimed to have been updated and it show too. While the system still doesnt support Apple CarPlay it’s much better than what I experienced eight months ago. The sound as usual is crisp, as can be expected from a modern day Tata car. The SUV is still spacious and there is enough headroom as well as legroom at the front and back. Interestingly, at this price point and given the intensity of the competition, Tata Motors still doesn’t offer features like auto headlights as well as wipers. At the time of introducing the Nexon to the market in August, Tata Motors did show us a wristband that doubles up as a key. It’s now ready to be rolled out. Wear the band and you can unlock the car as well as start it. However, as is the norm for such technology, it works only when there are sensors around. Cue? Available only in the top spec XZA+ Nexon that comes with push button start and door and boot lock/unlock sensors. It is likely that the manual Nexons too should get this, albeit at an additional cost. One can also configure their Nexon using the company’s website. Two packages – Activ and Aero are available for the same. 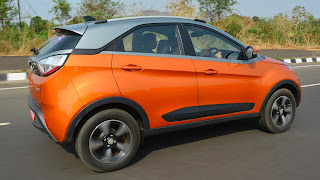 First movers always have a great advantage. Tata started the compact sedan shebang and the whole world latched onto it. In the process, the Tata Indigo CS lost ground without any significant update. This time around, Tata did their homework well and have got a product that’s hard to fault with. The Tata Nexon AMT not only challenges the others in the segment with new features as well as the convenience of an AMT but will most likely also undercut the price of future offerings from the competition. At the time of writing this story, Tata Motors havent announced the prices. However, I expect Tata to charge only a Rs 40,000 premium over the manual XZ+. The fuel efficiency is expected to slightly go down as is the case with most of the Tata automatic offerings. The launch is expected in the first week of May 2018.

Post their revamp, it can now be safely said that Tata Motors has upped the game considerably. A few of my friends have got the Nexon mid variants. Luckily for me, its a mix of petrol as well as diesel, so understanding the product from a reviewer point of view becomes much easier. Both the cars are from the first lot and there have been no reported issues. The service quality is up to the mark and there are no unnecessary charges levied too. These cars too have completed almost 10,000km and have kept  their owners all the more happy about their decision. So if you were planning to buy the Nexon, you’re walking down the right lane.