“Wait! What fuel do I put in?” The question posed by the fuel pump attendant wasn’t a surprise to me. I am driving the petrol Maruti Swift automatic and there aren’t any badges around the car that will suggest the fuel. A quick check with Maruti revealed why it is so. Well, I will not go in details about the same and you can read all about it on this link. 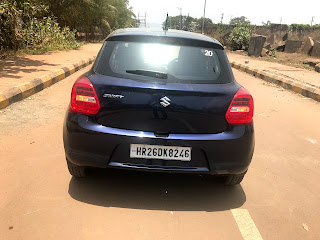 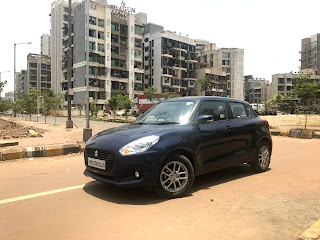 I must admit that the no badges look is growing on me. Put that aside and what you see is perhaps the best iteration of the Swift generations. Simple clean lines with no rounded corners anywhere. Kudos to the fact that one can easily differentiate a Swift and Dzire now. I had the ZXi AMT with me and while it is the top-spec trim in the automatic, it still doesn’t get all the goodies that the ZXI+ gets. This includes those projector headlights, DRLs, touchscreen infotainment system and the likes. 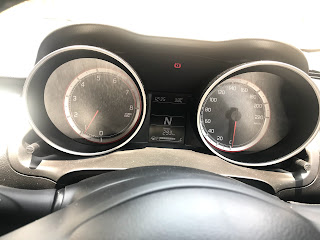 This new-gen Maruti Suzuki Swift is still a head-turner. Go anywhere and you still have folks turning to get a better look. Park it somewhere and you can still see a couple of heads trying to admire the car. I didn’t like the new Dzire as much as I do the Swift. 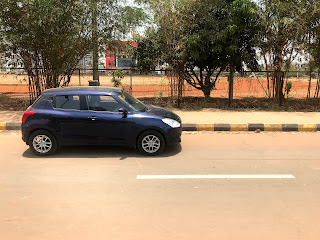 Enough of the design yapping, let’s get on with the drive experience? There is the push button start as well as door request sensors to go along with. I would have preferred a better looking key fob though. The 1.2-litre 85PS petrol engine quickly settles into idle. Start off and you realise that the AMT is eager to switch to a higher gear. In fact, 35kmph in 4th gear is something you will be used to seeing most of the times in the city. Step on the throttle and the system detects the urgency and drops a gear or two. This however, isn’t so far a quick process and is accompanied by some lag. But kudos to Maruti for refining the AMTs. This ‘box works better than the first-gen ones in the Celerio. While the fun element of the manual Swift cannot be compared with the AMT, it can be safely said that its just a couple of steps behind. During overtakes, it is safe to slot the lever to manual mode and shift the gears yourself. More and more I drive AMTs, I am convinced that the day will come when this technology will be totally jerk-free (during shifts). The Maruti Suzuki Swift AMT too provides for a next to no jerks during shifts. 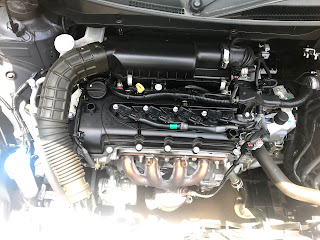 Efficiency of the new Maruti Suzuki Swift is pegged at 22kmpl for the petrol. In my tests, I found that the car returns close to 11kmpl in bumper to bumper traffic or if you drive with a heavy foot. A more economy conscious driver can eke out 13kmpl. On the highway, the numbers increased to 19kmpl, with a 100kmph constant speed. 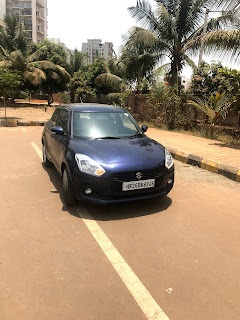 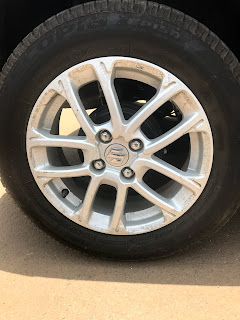 The steering wheel of the new Maruti Suzuki Swift is communicative enough and doesn’t feel too light in the city. To understand the changes from the older generation, I made a friend sit along side me.. He owns the older version and immediately told me that this one feels spacious, both at the front and back. Driving over a couple of potholes revealed that the suspension is a tad more absorptive than before. A couple of ruts didn’t exactly have us tossing around in the cabin. For a change, I sat on the backseat and that older claustrophobic feeling is gone. While the upholstery is done in all black, the cabin still feels roomy. What I appreciate is that nearly all the products from Maruti Suzuki these days have really sharp brakes. They give you the confidence to brake late (this wasn’t practised on a regular crowded street but on a deserted playground) and without losing composure. 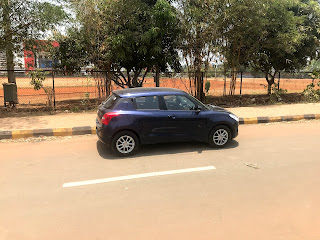 While I was giving the finishing touches to this story, an interesting fact came to the fore. Apparently some 23,000 Swift cars are being moved out of the showrooms each month since launch. This figure makes it India’s second most loved car, the Dzire being the first. Need I say more? If back seat space isn’t your priority, the Maruti Suzuki Swift will make for a great first time car or even a second car in the family. Prices for the petrol AMT start from Rs 6.34 lakh to Rs 6.96 lakh, ex-Mumbai. Irrespective of whether you buy the VXi or ZXi, ABS as well as dual airbags are standard. A win-win situation then!

Positives apart from those mentioned above

Not-so good points apart from those mentioned above

The seats aren’t that comfortable after a long stint

PS: The images aren’t that good and neither have they been processed. I am looking for a photographer who can come along on shoots. Credits and a chance to grow along with the brand will be your salary.