Toyota India has launched the Yaris sedan at Rs 8.75 lakh, ex-showroom pan India. The top-spec Toyota Yaris CVT is priced at Rs 14.07 lakh. Toyota India has now started taking bookings for the Yaris at Rs 50,000. Deliveries are expected to start from late next month. There are six colours on offer. The Toyota Yaris marks the company’s debut in a segment dominated by the Hyundai Verna, Maruti Ciaz and Honda City. 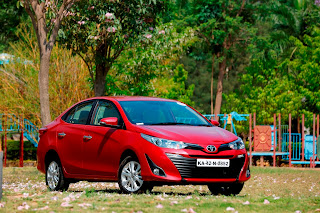 The Toyota Yaris boasts a safe design element that the Japanese company is known for. In fact, those familiar with the design philosophy will link the Yaris to its bigger brother, the Corolla. The projector headlamps along with LED DRLs as well as the wide air dam ensure that this Toyota will carve its niche in the segment. I personally like the tail section of the car as it reminds me of the Nissan Sunny – a car known to be the most spacious in the class. The lamps at the rear themselves are distinctive. 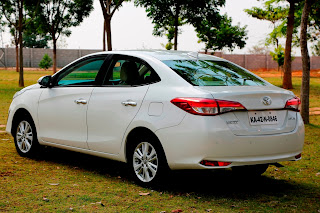 Toyota has specced the cabin with choicest of materials and given it a premium touch. On the top-spec VX trim, there are auto headlights, rain sensing wipers, powered driver’s seat, push button start, hand gesture for the touchscreen infotainment system and cruise control. Another first in this segment is the MPV-like roof mounted rear AC vents. The best part about these vents is that they swivel to provide the front passenger as well as the driver cool  air on their shoulders. Indeed a thoughtful touch there. While I haven’t driven the car yet to comment about the spaciousness of the cabin or tell you more about how the engine feels, I assume the cabin to be at par with that of the Verna if not slightly better. 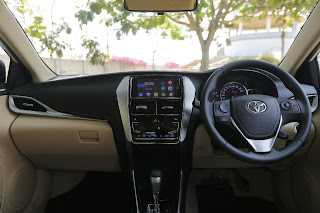 Coming to the engine. Toyota have used the same 1.5-litre engine block from the Etios but have added dual variable valve timing. The power has been bumped from the earlier 90PS to now 107PS. The torque stands at 140Nm. Toyota offers the Yaris with a choice of a 6-speed manual as well as a 7-speed CVT with paddle shifters. The CVT is being offered right from the base trim. The quoted fuel efficiency for the manual is 17.1kmpl while that for the CVT is 17.8kmpl. There is no diesel engine on offer for now and I believe that Toyota is quietly shifting towards petrol as well as hybrid power trains given the global mandate.

Toyota have also ensured that the Yaris is specced with all four disc brakes, seven airbags and ABS as standard. The top variants get a tyre pressure monitoring system, vehicle stability control and front as well as rear parking sensors.

Here is the complete price list of the Toyota Yaris. Prices are introductory and remain the same pan-India