Two weeks after the media experienced the Tata Nexon automatic, Tata Motors has announced prices. You can now buy the Tata Nexon petrol AMT at Rs 9.41 lakh while the diesel Tata Nexon AMT is priced at Rs 10.38 lakh, ex-Delhi. The automatic trims of the Nexon are based on the top-spec XZ+ trims. Tata Motors also offers the Nexon XZA+ dual tone petrol at Rs 9.61 lakh and the diesel at Rs 10.58 lakh. These prices are roughly Rs 60,000 over their manual trims, something which I had predicted in my first drive report of the Tata Nexon AMT. 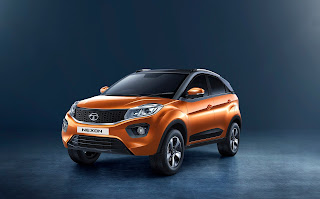 For starters, the Tata Nexon AMT gets a unique Etna Orange exterior paint scheme. Well, buyers can choose from five other colour options too. The fog lamp surrounds as well as the dual tone roof now have a silver accent as compared to the white ones on the manual trims. The only giveaway that this is an automatic trim of the Nexon is the XZA badging at the back. Inside, the meters have a slight change wherein the gear engaged is displayed and so is the need to press the brake pedal before starting the car. The biggest though is the absence of a stick shift and instead one has to use the automatic gear lever. Tata Motors offers the three drive modes as seen on the manual in the automatic too. These alter the engine characteristics based on the mode selected. What I particularly liked is the reduced perception of gear changes. You don’t travel in your seat all the way ahead every time a gear shift happens. Then there is also the creep function which will let you move ahead in traffic without use of the accelerator. The Nexon automatic also comes with a Hill Assist function that doesn’t let the SUV roll back on inclines or even at traffic signals.

Other features include the use of an Imaginator as Tata likes to call it. The Imaginator helps a customer configure his/her Nexon the way they want it to be. There are aero packages as well as styling elements that will ensure that no two Nexons look the same. Top-spec trims with a push button start will also have an optional PEPS key that is a wearable band and eliminates the need to carry the key along. One can lock/unlock the car as well as start it by wearing the wristband.

All said and done, the Tata Nexon remains the only car in its segment to offer both petrol as well as diesel automatic options. Going by the look of it and given the pricing-features pair, the Tata Nexon AMT is a sure shot winner for those looking for automatic convenience as well as affordability.