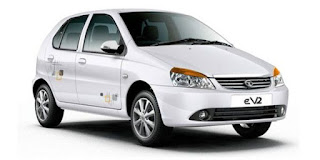 Tata Motors has pulled the plug on its first-ever passenger car, the Indica as well as India’s sub-4m compact sedan antecedent, the Indigo eCS. The Tata Indigo eCS is based on the Indica and used to sit between the hatchback as well as Indigo Manza. Both these cars catered heavily to the taxi  segment in India. It was only five years ago that Tata Motors had given the Indigo a facelift as well as factory fitted CNG option. The Indica also benefited from this benevolence.

Tata Motors says that as is the norm, it will continue to provide service support for both these cars for atleast the next 10 years. The Tata Indica was truly a revolution in the Indian automobile sector after the Maruti 800. Launched in 1998 at the Geneva Auto Show, the Tata Indica was designed by I.D.E.A  and was instantly lapped by the Indian public. It’s low sticker price combined with the diesel efficiency was what endeared it to the masses. However, word quickly spread that the Indica had far too many niggles and Tata instantly responded with the V2 version in 2001. This sort of solved most of the problems with the first-gen car. A turbo diesel engine was introduced in 2004 and this motor ensured that the sales of the Indica soared. With the passage of time, many more Tata Indica iterations were introduced like the Vista, Vista 90 and so on.

The tourist taxi market lapped up the Indica twins. Call centres, airport taxis and the like were fixated with the small Tata (not to be mistaken with the Nano). Its low cost of running, more than ample space for a hatch and decent features made it a darling of the meter brigade too. When the Indigo XL came out, it nearly had the space of let’s say a Maruti Ciaz and for at least Rs 2.5 lakhs less price point. Poor quality and apathy from Tata service centres however took the sheen away from the car. That it was being used as a taxi only further kept the regular customers away.

What next for Tata? The Nexon is the last of legacy products that use the older platform. The same platform also hosts the Bolt, Zest, Tiago and Tigor. While the first two may now be pressed onto taxi duty exclusively, the Tiago and Tigor have been doing sort of well in the regular passenger segment. Tata also has electric iterations of Tiago and Tigor ready.

All new upcoming Tata products will be based on new platforms like the Baleno rival as well as the HX5. While Tata Motors hasn’t announced it yet, production of the Nano too has come to an end. This means used car prices of the Indica, Indigo as well as the Nano will hit an all-time low. As it is a well maintained 2011 Indica diesel will sell for around Rs one lakh while an Indigo will get you Rs 15,000 more. Expect those prices to halve. Good time for used car buyers then! A word of caution though. Choose an Indica or Indigo with ABS and dual airbags. It will be worth the extra investment!