Mahindra SsangYong Rexton G4 spied testing in India; could be called as XUV700

Mahindra’s plan of bringing in a luxurious 7-seater. One that will sit above the Mahindra XUV500. These intentions were announced just last year and earlier in 2018, Mahindra did showcase the updated SsangYong Rexton G4 at the Auto Expo. It was also announced that this SUV will be badged as a Mahindra and not as a SsangYong purely because the audience didn’t connect to the Korean brand before. It could likely be renamed as a XUV700. 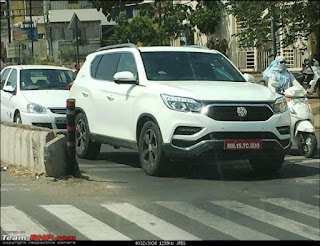 Now, a new SangYong Rexton was spotted testing sans camouflage. The vehicle was filmed by Youtube user Prabhat Sharma. The SsangYong Mahindra G4 Rexton had the same grille from the international car. Mahindra showcased the Rexton at the Auto Expo with their own sabre tooth grille and logo. The face of the car looks fresh and the HID headlights look arresting. There are LED DRLs in the headlamp assembly as well as near where one will expect the fog lamps to be. The SUV rides on massive 19-inch wheels. Inside the cabin, this is set to be Mahindra’s most luxurious car till date. There is a black and brown upholstery, a touchscreen music system, sunroof, electric boot release, heated/cooled front seats and more. Mahindra will use a new 2.2-litre 187PS/420Nm diesel engine. While there will be AWD on offer with the 7-speed automatic transmission, Mahindra could also launch a manual Rexton. This will enable the company to price the car at an attractive starting point.

The Mahindra Rexton or XUV700 will go head on against the Toyota Fortuner, Ford Endeavour and the Isuzu MU-X. The vehicle will be launched closer to the festive season in India.