After a thunderous closing to the FY 2017-18 with more than 61 lakh units sold, Honda Motorcycle and Scooter India has now chalked out plans for the upcoming fiscal year with a firm eye on 2020. A statement from the company says that they have started preparations for BS-VI implementation, something which will come into effect in our country from 2020. It may be recollected that Mercedes-Benz India have already started the process by launching the first BS-VI S-Class a couple of months back.Currently HMSI plants are being upgraded to BS-VI processes and we expect the company to launch its first compliant product by 2019. A  budget of Rs 800 crore has been earmarked for the same too. Vendors as well as suppliers have already been intimated of the timelines too.

Apart from this, the other initiatives announced include the start of a new Honda Joy club. The Honda joy club intends to keep HMSI customers within the company fold through a loyalty program. HMSI in their survey has noted that the average span of a customer using his two-wheeler has gone down to 3-5 years as compared to the 5-7 before. It is likely that similar to the way four-wheeler manufacturers offer, HMSI may also offer customer a discount if they are upgrading from a Honda. More details on the same though are awaited.

During the fiscal year 2018-19, Honda will introduce one brand new two-wheeler in India. We believe it to be an on-off road motorcycle like the Impulse but with a bigger engine to fly to Budapest, you can take on Hero MotoCorp and Royal Enfield. This motorcycle may also be the first one with a  BS-VI compliant engine. All of Honda’s existing 18 products too will get updates. We assume these to be the addition of Combi braking for 125cc and less products while the addition of ABS for those above. 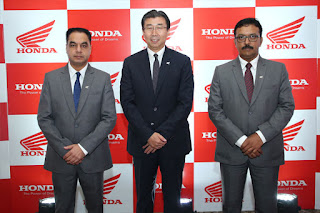 To enable customers to have easy access to their products, HMSI will have more than 6,000 touch points while its used motorcycle dealers are expected to expand to 250 by the end of this year.

To create awareness about road safety as well as brand awareness, HMSI will have a new communications team specifically for this task. Spreading the word through motorsport as well as road safety promotion will be the core task of this team.