Ford India has launched the Figo-based crossover, the Freestyle CUV at Rs 5.09  lakh, ex-showroom. The Ford Freestyle comes in two variants spread across eight trims – Ambient, Trend, Titanium and Titanium+. Ford says the around 50 per cent of the Freestyle’s development was done in India and it is a ground-up vehicle. The Ford Freestyle will compete with the Honda WR-V, Hyundai I20 Active, Volkswagen Polo Cross, Fiat Urban Cross and Toyota Etios Cross. The price of the petrol Freestyle ranges between Rs 5.09 lakh – Rs 6.94 lakh while the diesel starts from Rs 6.09 lakh and goes all the way to Rs 7.89 lakh. 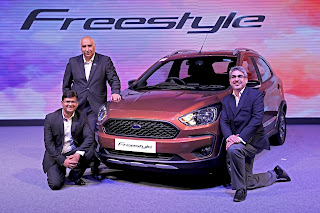 The Ford Freestyle is based on the Figo’s platform and looks like a jacked up version of the hatch. Ford however says that while the dimensions may be similar, the Freestyle is a separate new vehicle. For starters, the look  of the car too is different. Sure it has the all too important cladding all around the body to give it that SUV look, but there are big changes too. These include new headlights, slightly altered grille, 15-inch wheels as standard, skid plates as well as 190mm ground clearance. I believe the latter will be at the kerb weight level and not at the gross vehicle weight as mandated by the ARAI. The cabin too is a mix of black for the lower part of the dashboard and rich-looking brown colour upholstery for the upper part. The seats are done in a light grey theme. Taking centre stage is the new infotainment system from the EcoSport that is a touchscreen unit. I wasn’t a big fan of the music system used in the new Figo and Aspire as it was a tad too confusing on the move. The new one hopefully should be better in this aspect. The legroom at the back too is claimed to be better than other hatchback offerings. 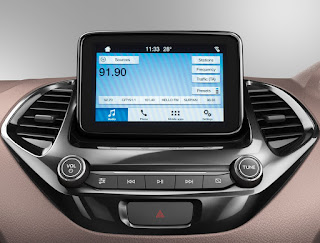 Ford uses a new 3-cylinder, 1.2-litre naturally aspirated petrol engine from its recently created Dragon family in the Freestyle CUV. The engine makes 96PS and 120Nm. A new 5-speed manual gearbox too debuts with this engine. The claimed fuel efficiency is 19.0kmpl. The diesel in the meanwhile is the 100PS/215Nm 1.5-litre turbo unit. The claimed efficiency is 24.4kmpl. Ford offers both the engines with a manual transmission only. 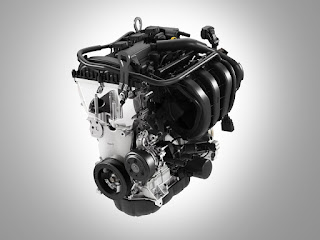 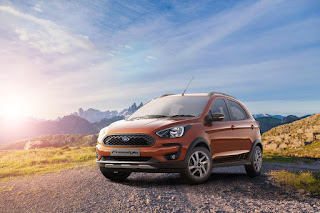 On the safety front,  the Titanium+ gets six airbags, traction control, Active Rollover Prevention (available on the Titanium trim too) and Emergency Assistance. Ford says that the service interval of the new Freestyle is 10,000km apart and the service costs will be 43 paise per km for the petrol and 50 paise per km for the diesel. The spare parts too are priced 20 per cent lower than that of competing hatchbacks.