Heard of the name Artem Energy? I wouldn’t be surprised if you replied “no”. It’s a start-up and is based out of Mumbai. Artem Energy claims that their M9 electric scooter will be the safest two-wheeler ever made. Tall claim, eh? There is more to it. The Artem M9 will use radar technology to warn the rider of any obstacle in his path. There will also be cameras plugged to the scooter to assist it in obstacle detection. Prevention is better than cure, isn’t it. Artem thinks the same too and its Advanced Driver Assistance System or ADAS behaves in a two-step approach. One is the Collision Prevention and second is the Collision Alert. A smart helmet which will be part of the standard fare with the scooter will be provided and this will relay information to the rider about proximity of an obstacle. As part of its Collision Prevention dragnet, the M9 uses electro-dynamic braking, something that applies reverse traction force to rapidly bring the scooter to a halt. If you unfortunately still crash, then the M9 will send a text message to the five numbers stored on the scooter as emergency contacts and inform them of your location. The nearby medical aid too is informed. The Artem M9 will also inform tailgaters that they are too close to the scooter and should cool off. After executing a turn, the M9 auto cancels the indicators as well as informs riders about blind spots and the dangers lurking around the corner. 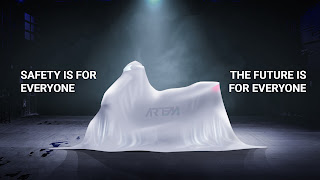 Artem Energy hasn’t let out much details about the type of battery cell used in the M9 but numbers like 0-50kmph in 6 seconds, top speed of 90kmph and 100km range have been discussed. The battery can be charged via an onboard fast charger. The battery too can be swapped provided the infrastructure supports the same. The Artem M9 scooter will be followed by the M9-A and the  M6. Artem says that the M6 will be a mass scooter.

I have some reservations about the sort of environment that the M9 will be. In India where everywhere there is choc-a-block traffic, the system is expected to go crazy with all the warnings. Use of radar might require government approvals and many high-end car companies too have had to toil for the same. Not only this, radar is going to increase the price significantly. The smart helmet that will be available with the scooter has to be worn by the rider while riding the scooter. In India, riders usually use helmets only when they spot a cop around. Once the cop is out of sight, the helmet rests on the mirror stalk. In this case, how will it inform one of the hazards.