Honda Cars India Limited (HCIL) has commenced bookings of the new Amaze at Rs 21,000. Dealers across India have started accepting orders. The second-gen Honda Amaze will be launched in India next month and was first showcased at the Auto Expo 2018. The new Honda Amaze was developed by the company’s research centre in Bangkok.

The all-new Amaze is underpinned by a light weight platform that will also form the basis for the next-gen Brio and a compact SUV. The new Jazz could also be based on this platform. The new Amaze doesn’t bear any resemblance to the old car While the earlier model was curvier, this one is all about straight lines and to me, it seems like the design that the Ford Aspire had adopted. While there is no confirmation yet, it looks like Honda will offer LED headlights along with DRLs on the top-spec trim just like in the City. Then there are new fog lamps, alloy wheels, bumpers as well as tail lamps. For the first time, the Amaze will also come with door request sensors, rear parking sensors, rear view camera, push button start, Digipad infotainment system complete with navigation, Android Auto as well as Apple CarPlay. There will also be climate control, adjustable front headrests and multi function steering wheel with cruise control as an added function. 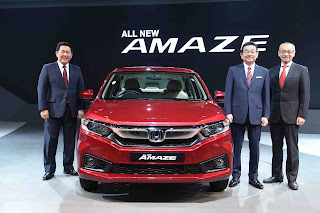 On the safety front, ISOFIX child seat mounts, dual airbags as well as ABS with EBD will be standard across the range. If my memory serves me right, in early 2017, HCIL did mention that by May 2017, the Amaze range will get this as standard. I assume this to be hold good now right from the start. 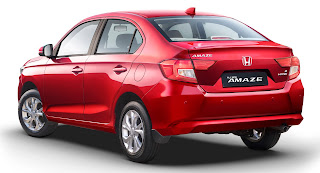 The exiting range of 1.2-litre as well as 1.5-litre petrol and diesel engines respectively should take a cheap loan, It is likely that the diesel will be tuned to eke out a bit more fuel efficiency from its 100PS/200Nm configuration and there will also be special attention paid to the NVH. Critics as well as customers had often pointed out that while this engine may be easily have one of the best driveable characteristics around, it was noisy. Hopefully this should have been taken care off this time. The Honda Amaze’s 85PS petrol motor will continue with a tad more efficiency added to its claimed figure. What’s totally new for the engines will be a CVT mated  to both the petrol as well as diesel. While only the petrol will get paddle shifters, given it rev-happy nature, the diesel will be the first in the segment to offer a CVT. It will not only add to the appeal of the car but also make buying decisions even harder. With the Maruti Dzire offering a trustworthy AMT for its engines, the Tigor with a petrol AMT and the Xcent with a torque convertor for its petrol motor, the Amaze could just have the right ammo to take on the competition. Might I add, its better looking on the inside too.

What happens to the older-gen Amaze? Its available now at huge discounts and I have a hunch. Just like the Dzire Tour and now the Xcent Prime, HCIL might offer the older Amaze to tour operators,

Mahindra SsangYong Rexton G4 spied testing in India; could be called as XUV700